TTRA is pleased to introduce our 2020 International Conference Keynote Speakers below.

Anna Pollock is an established and highly respected thinker, change maker who has served the international tourism sector for over 40 years. Recognised as a visionary by the industry in Canada, where she worked for 20 years,  Anna has contributed to our understanding of tourism dynamics for four decades, including the emergence of wellness and sustainability in the 1970s; the transformative impact of technology on tourism marketing; the need to shift from a focus on products to the development of experiences; the importance of climate change and biodiversity degeneration; and the deep shift in human values that is underpinning the emergence of a more mindful, discerning traveller.

Anna has shared her thinking via numerous papers and presentations designed for a wide range of interested parties – commercial suppliers; students of tourism; policy makers, NGOs etc.  Her papers and articles are available on LinkedIn and Slideshare

Ten years ago, Anna founded Conscious.Travel – a consultancy designed to help her clients (mostly destinations) make sense of the changes occurring around them and formulate strategies that would enable them to survive and thrive.. For the past two years she has been co-developing the Travel to Tomorrow program which has enabled Flanders to fundamentally shift its purpose from volume to value and to engage more of its community partners in co-developing a shared vision for tourism to and within their region. She is currently developing a community-based learning journey that would enable communities to shape the kind of regenerative tourism suitable to their specific place and conditions

Paul Ouimet is the Partner, President of MMGY NextFactor a privately-held company he established in 2015. He also serves as Managing Director of DestinationNEXT in a partnership with Destinations International, a professional trade association based in Washington DC.

He was one of three founding partners of InterVISTAS Consulting Inc. in 1997. For 20 years, he played a major role in building it into a multinational company with offices in the U.S., Canada, and Europe. Specializing in aviation, transportation and tourism, InterVISTAS has completed projects in over 75 countries. Paul has retained the role of Executive Consultant at InterVISTAS since leaving the firm in 2015.

He has also facilitated over 300 planning retreats and led major several community consultation and engagement processes.

During the past 4 years, Paul has led the team which developed and delivered DestinationNEXT, an important Destinations International initiative on the future of DMOs. DestinationNEXT was ranked by SKIFT  Magazine as one of the top 10 biggest developments in the global tourism industry in 2015.

He has spoken around the world on this new strategic roadmap for the DMO industry. He and his team have now completed over 180 detailed assessments of destinations around the world.

Paul’s Keynote will be on Destination Stewardship and Community Alignment.

Dr. Chris Bottrill is the elected Chair of the Pacific Asia Travel Association (PATA) based in Bangkok, Thailand, and Director, International at Capilano University, Vancouver BC. From 2010 to 2018, Chris held the role of Dean of Global and Community Studies at Capilano University that included Schools of Tourism and Hospitality Management, Public Administration, and Global Stewardship. Chris is only the second educator to have held the role of PATA Chair and has spearheaded considerable change to engage membership in a modified Association aligned with social and business dynamics of the 21st century.

Chris is an accomplished educator and administrator and has a wide background of applied experiences. He has taught tourism sustainability, destination development, entrepreneurship, and adventure management topics in universities in Canada, New Zealand, USA and Austria, and he has served as Dean of three Faculties and oversees all international recruitment, admissions, partnerships, and global engagement activities. He has also completed over 50 tourism development projects around the globe. His current and recent activities include directing the acclaimed Capilano University and Hanoi Open University Vietnam Community Tourism project aimed at protecting ethnic hill tribe culture through tourism, leading a Pacific Asia study on Indigenous Tourism and Human Rights, and designing and facilitating seven youth symposiums with over 20 universities in the Asia Pacific over the past four years. Chris has presented on tourism related topics at conferences and forums in China, Canada, USA, Russia, Finland, New Zealand, Vietnam, Malaysia, India, and Cambodia.

He holds a PhD from the Faculty of Commerce and School of Management at Victoria University in Wellington, New Zealand, an MA Honours in Geography from the University of Canterbury, Christchurch, NZ.

Chris’s Keynote will be on Enriching Culture through Tourism. 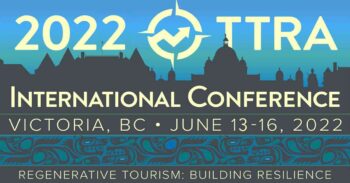